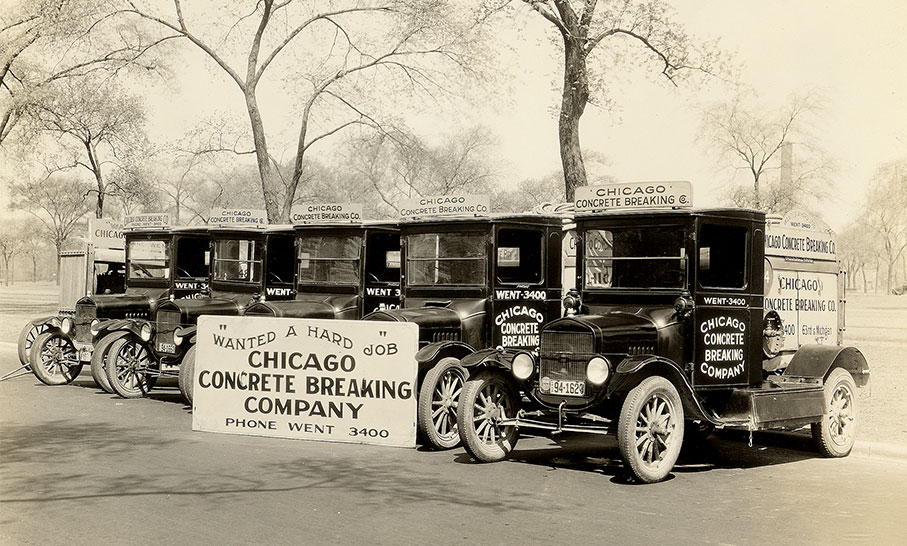 Graycor was founded in 1921 as Chicago Concrete Breaking Company (CCBC). Since its early days as a specialty contractor, CCBC (now Graycor) has built its reputation by taking on challenging projects that require innovative solutions. Today, some 93 years later, Graycor continues to add to its top-tier industrial construction skills and long list of globally recognized clients.

One of the first “big breaks” for CCBC came in 1926 when the company was asked to remove a section of a retaining wall alongside the Illinois Central Railroad tracks in Chicago. Using explosives, the project was completed without disturbing any train operations and helped land CCBC the job of demolishing a stack at Standard Oil’s (now BP) Whiting, Indiana facility. Safety and efficiency with this work inspired CCBC to expand its services. The company acquired expertise in removing salamanders-large masses of solidified metallic waste materials-from steel mill furnaces, using explosives and specially modified machinery to do the work. Its breakthrough came in the early ’30s when Edward Gray convinced management at International Harvester’s Wisconsin Steel that he could break and remove a salamander in this manner without damaging the furnace. The result was faster turn-around of steel making facilities with a dramatic reduction in manual labor. CCBC became a specialized provider of these high value services throughout the United States during the 1930s and ’40s. CCBC’s first taste of international work came in February 1940 by way of an urgent telegram from Tata Iron and Steel Company requesting expert services to remove a salamander from Blast Furnace B at its plant in Jamshedpur, India. CCBC mobilized quickly and completed the project in the spring of 1940, helping to forge its worldwide reputation as a leader in the steel mill services industry just as World War II was getting under way.

During World War II, downtime for steel mills was especially critical due to high-volume weapon production requirements. During this time, the steel mill maintenance business boomed for CCBC, and the company expanded to include open hearth furnace and slag pit cleaning. Always striving to improve services for its clients, CCBC modified various tools and developed new equipment such as track-mounted, front-end loading machines known as the “Overhead Loader” and the “Jet Trapper” to remove broken materials and help facilitate a faster cleaning process. By this time, CCBC had established itself as the market leader in all types of cleaning work at steel mills.

In the late 1940s and early 1950s, CCBC evolved from being a specialty contractor to a general contractor for steel companies. CCBC hired subcontractors for removal and installation of masonry, installation of peripheral equipment, excavation and other services required for construction of steel making facilities. During this time, CCBC developed into a full-scale industrial organization specializing in repair and rebuild of steel-making furnaces and finishing facilities. In the 1950s CCBC successfully completed a relining and rebuilding project for Edgar Thompson Works for U.S. Steel in Pittsburgh, Pennsylvania. These early years paved the way for the company to broaden its customer base in heavy industrial construction to include a wide range of manufacturing and process industries. Along with this growth came the name change to Edward Gray Corporation.

In the 1960’s, Edward Gray Corporation began self-performing major concrete works and construction of various steel mill related facilities. In 1968, the company completed the construction of a precipitator (used in steel mills and power plants to control their particulate matter emissions) for Republic Steel, marking its entry into the environmental construction market. Graycor leveraged this experience and went on to successfully complete major environmental and air quality projects for major power producing clients such as Alliant Energy, American Electric Power (AEP), Midwest Generation, Xcel Energy and Northern Indian Public Services Company (NIPSCO). A big change in the steel industry at the time was replacing open hearth furnaces with basic oxygen furnaces (BOFs). Edward Gray Corporation started providing construction services for the BOF’s concrete base and markedly increased its concrete work through the end of the 1960s.

In the 1970s and 1980s, with the evolution of the continuous caster for steel production, the company started doing more and more concrete projects and work for companies such as Inland Steel and Bethlehem Steel, sealing its position as a market leader in steel mill construction. In 1985, the name of the company was changed to Graycor, the brand that is recognized today in markets across North America. The 1980s saw Graycor’s expansion into the power construction market including an architecturally enclosed substation project that Graycor completed for its longtime client ComEd in downtown Chicago during 1987. Seeing new opportunities, Graycor broadened its capabilities to include pipelines, petrochemical plants, machinery, process equipment installations and steel erection over the next decade. During this time Graycor completed a project for I/N Tek (a joint venture between ArcelorMittal and Nippon Steel & Sumitomo Metal) which included construction for a continuous cold mill, pickle line, continuous anneal line and related components. This helped Graycor secure the similarly scoped AK Steel Rockport project, marking the beginning of a long relationship with AK Steel – Graycor recently celebrated 20 years of industrial service at AK Steel’s Middletown facility in Ohio.

During the early 2000s, Graycor continued to provide services for environmental class projects. Graycor provided engineering, procurement and construction for a combined-cycle power plant for Reliant Energy in Primm, Nevada. By this time, the company had established itself as a leader in various types of industrial construction. One of the most monumental projects for Graycor’s rapidly growing steel construction resume was the Severstal blast furnace project in Dearborn, Michigan at the River Rogue plant that was completed in 2007. This project was significant because it was the largest project Graycor had ever worked on, but was also a benchmark feat for the steel construction industry as a whole. Another notable accomplishment was Graycor Industrial Constructors’ work at Duke Energy’s clean-coal integrated gasification combined-cycle plant (IGCC) in Edwardsport, Indiana. The project involved using gasified coal to fuel large, power-generating turbines. Graycor’s work on this project was completed in December 2011, a milestone marking one of the largest projects completed by Graycor in its history. The company today continues to add bigger and more challenging projects to its ever-growing body of industrial work.

All the success and growth over the past century would not have been possible without adhering to certain virtues and principles. The most important and the most central principle for Graycor has been a commitment to safety. Melvin Gray, Graycor’s Chairman (Emeritus) states, “Virtually from the time of the company’s founding, Graycor’s commitment to safety was evident in early client testimonials. This focus on safety has served Graycor well as its safety record has exceeded its industry peers over the years. Graycor, an ISO 9001-registered company, adheres to its proprietary Zero Injuries program that has become an industry standard against which clients compare and judge their contractors.” Melvin Gray’s most famous saying at Graycor that all its employees know by heart is, “Nothing is more important than safety, not production, not sales, not profits.”