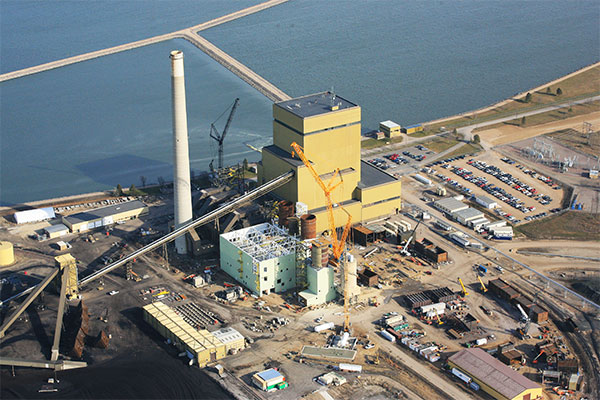 In mid-March 2013, a project to install an air quality control system (AQCS) began at Otter Tail Power Company’s Big Stone Plant located in Big Stone City, South Dakota. The environmental project, now approximately 40 percent completed, has made significant progress since breaking ground. With 160,000 pounds of reinforcement steel and 11,500 cubic yards of concrete deployed, the superstructure steel erection has commenced. Both the waste ash structure and the baghouse structure are now complete, and the dry scrubber vessels have been set, leaving the remaining focus on the baghouse module components and equipment. Assembly completion is expected by mid-August 2014, with the balance of the year focused on completing mechanical and electrical to support the system turnovers. Approximately 300 workers are on the job site, and it is projected the number of workers will steadily increase to approximately 400 by summer and then taper off for the remainder of 2014.

“To date, with over 500,000 craft labor hours worked, the project has experienced only two recordable injuries,” said Jack Carlson, Vice President, Safety and Quality for Graycor, the AQCS general contractor on the project. “For every 50 craft workers, Graycor has designated one safety representative solely accountable for the safety of those workers. We require safety training for all workers before they come on the job site, and we employ strong safety discipline measures,” Carlson added.

Steel erection as well as ductwork assembly and erection are in full swing, with close to 50 percent or 4,800 tons of ductwork and steel installed to date. Siding, mechanical and electrical forces are also ramping up in the baghouse and waste ash areas as more equipment is set and the weather improves after enduring three months of difficult weather with many days reaching temperatures of -15F or below with steady winds. The scheduled critical path for the selective catalytic reduction (SCR) system continues to be a focus, scheduled to be completed this year prior to the ductwork tie-in completing in the spring of 2015. Several critical crane lifts have been completed to date including the SCR steel trusses and ductwork sections which have been engineered for safety and success, with the heaviest lifts yet to come, weighing over 400,000 pounds. Structural steel, ductwork and equipment deliveries are starting to slow down having received approximately 1,400 loads to-date with several semi-loads arriving each day for the past eight months at the AQCS site.

“We are excited to have the opportunity to work with the Otter Tail Power team on this significant project,” said Robert Fritsche, Vice President at Graycor Industrial Constructors. “We feel we have mapped out a well thought-out and technical plan to provide the right construction solution to this complex project. The severe winter presented some interesting challenges, but we were able to work through, as a result of strong planning and preparation.”

“We are very pleased with the progress we have made to-date,” said AQCS Project Manager Mark Rolfes from Otter Tail Power. “We have gone from turning the first shovel of dirt to having thousands of yards of concrete poured and steel more than 100 feet in the air. Next year will bring even greater progress,” he added.