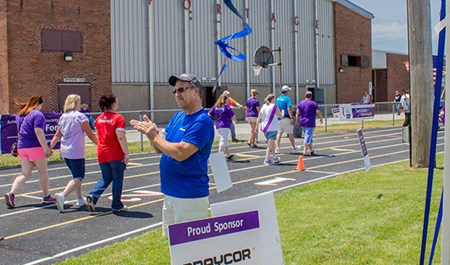 Enjoying Saturday’s early summer-like weather, ‘Team Graycor’ was among 51 teams and 335 participants who pitched tents and walked laps for The American Cancer Society’s Relay For Life of Portage. The fundraiser event—held on June 11, 2016, at Willowcreek Middle School in Portage, Indiana—marked Graycor’s fifth consecutive year participating and a record-breaker for its highest Relay For Life contribution to date. The event raised $51,000 in total team donations, of which Graycor’s team—comprised of nearly 70 Graycor employees, family and friends—contributed $11,000!

Funds were raised in a variety of ways such as sponsorship contributions, which included $2,500 from Graycor’s Community Fund Program, as well as local businesses and trade and union associations. Graycor also held its silent auction once again this year, adding nearly $1,900 in donations.

The remaining funds were received through games, crafts and activities offered during the relay, as well as employee contributions.

The 12-hour relay kicked off at noon with an opening ceremony of motivational speakers and designated laps for survivors, caregivers and teams who took turns walking until midnight. The family-focused day featured activities, games, themed laps, races and competitions, as well as food and prizes for participants of all ages.