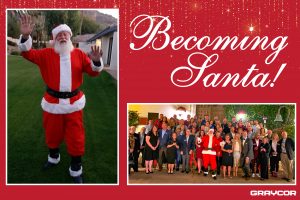 It all started with the growing of a beard and an epic dream that would send Terry Morell, Superintendent at Graycor’s Phoenix office, down a path of becoming Santa. One evening as Terry was asleep, he dreamt that he was Santa and his loving wife was Mrs. Claus. He put on the traditional red suit and as they stepped outside through giant doors, they were in front of a crowd of tiny children cheering “Santa! Santa! Santa!” Terry snapped out of his dream and immediately woke up his wife to tell her all about it. To Terry, dreams are extremely important. He believes dreams can help you see the future. “I took my dream as a premonition. I am extremely passionate and when I get on to something, it takes over me,” says Terry.

Months later, Terry and his wife snap of photo of themselves and send it to their daughter in North Carolina who babysits a 3-year-old little girl. Their daughter was excited to show the little girl and she explained, “my dad is Santa Claus!” They proceeded to hop on a Facetime call with the little girl and the joy and excitement that came from getting to speak to Santa was undeniable. “My passion is children; my wife and I love children so much. If I can make a child smile, even just for two minutes, that is all worth it. We need to give more, with passion,” exclaimed Terry.

As the months went on, Terry emulated the spirit and joy that is Santa. On Halloween this past year, Terry was handing out candy to trick or treaters donning just the red Santa hat. A little girl approached his door and her eyes were the size of oranges. In another instance, Terry was at PetSmart with his yellow lab where he was approached by an older gentleman. The gentleman asked if he could speak to him for a minute and explained that his children saw him outside the store and made him stop because they said, “Look! It’s Santa Claus and Santa has a yellow dog!” As Terry met with the children and they interacted with his lab, they couldn’t help but take their eyes off Terry as they truly believed he was Santa. “It’s happiness, it’s joy, and to get a reaction out of kids like that is incredible.”

All these moments would ultimately lead up to Terry getting an opportunity to spread his Santa spirit and surprise his co-workers at the recent Graycor Holiday party. With the party already commencing, Terry walked in as Santa and surprised the team. Their reactions were shock and joy. “We are more than a construction company, we are family. We care about each other and we have to make each other happy when we can. We also have to have a lot of fun – that’s what it’s all about,” said Terry. Graycor is very grateful to have an individual who loves life and making people happy as much as Terry Morrell. He reminds us to spread kindness and happiness not only during the holiday season but all year round.